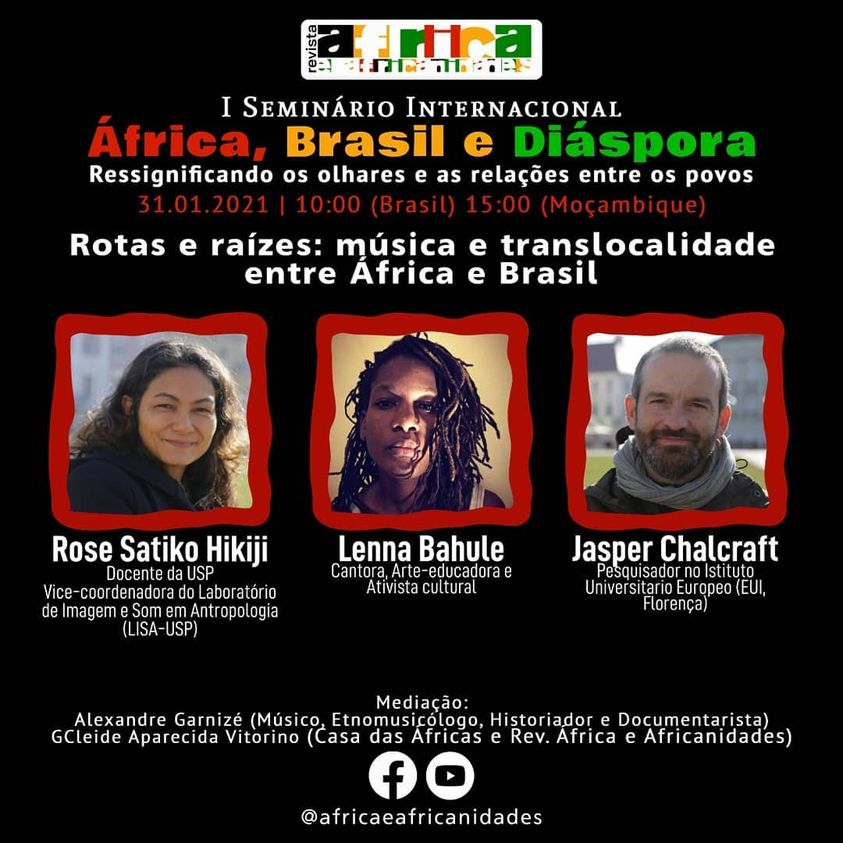 Screening of the film Woya Hayi Mawe - International Seminar “Africa, Brazil and the Diaspora: giving new meaning to the views and relations between peoples”
online

The film "Woya Hayi Mawe", by Rose Satiko Hikiji and Jasper Chalcraft and produced on LISA will be shown on the International Seminar “Africa, Brazil and the Diaspora: giving new meaning to the views and relations between peoples”

Check out the teaser of the film! 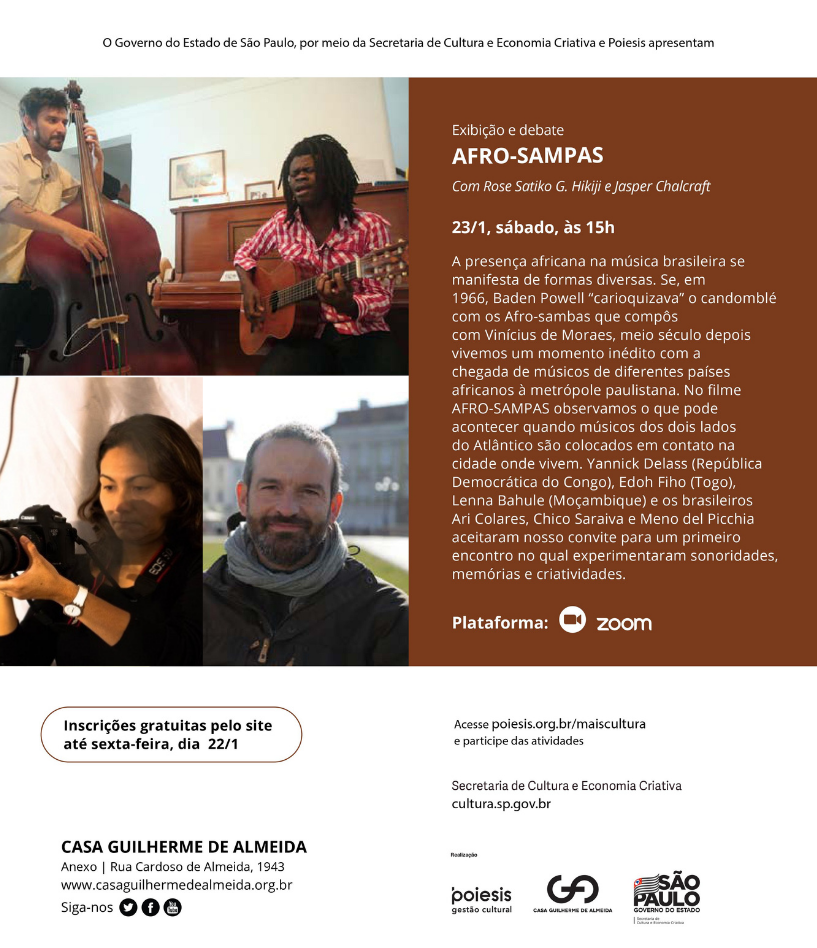 The African presence in Brazilian music manifests itself in several ways. If, in 1966, Baden Powell "carioquizava" candomblé with the Afro-sambas he composed with Vinícius de Moraes, half a century later we live an unprecedented moment with the arrival of musicians from different African countries to the metropolis of São Paulo. In the film Afro-Sampas we see what can happen when musicians from both sides of the Atlantic are brought into contact in the city where they live. Yannick Delass (Democratic Republic of Congo), Edoh Fiho (Togo), Lenna Bahule (Mozambique) and Brazilians Ari Colares, Chico Saraiva and Meno del Picchia accepted our invitation to a first meeting in which they experience sounds, memories and creativity.
Afro-Sampas received the award for best film at the ANPOCS Meeting, 2020, and Woya Hayi Mawe - Where are you going? - another film by the same directors - was elected the best medium-length film at the Pierre Verger 2020 Award (Brazilian Association of Anthropology).
The event is commemorating São Paulo's birthday and the film's session will be online via Zoom, on January 23, Saturday, at 3 pm. Free registration!
Registration on the Casa Guilherme de Almeida website
The screening of the documentary and the debate will be online through the Zoom platform 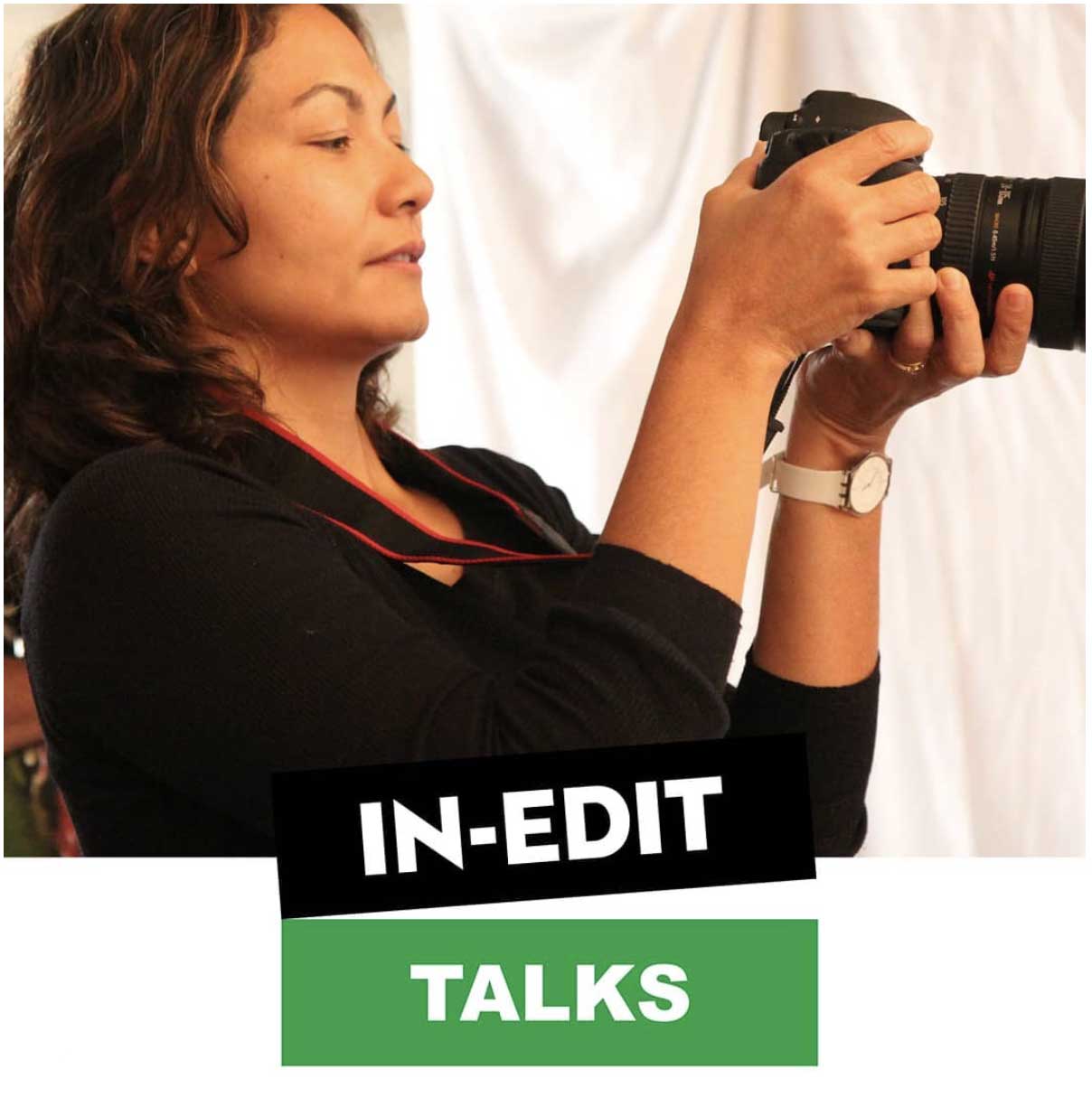 This Wednesday, December 9, at 7 pm, Professor Rose Satiko Hikiji, deputy coordinator of the Laboratory of Image and Sound in Anthropology (LISA-USP), is interviewed at In-Edit Talks, by Marcelo Aliche and Maurício Gaia do In-Edit Brasil, Festival and Musical Documentaries channel. 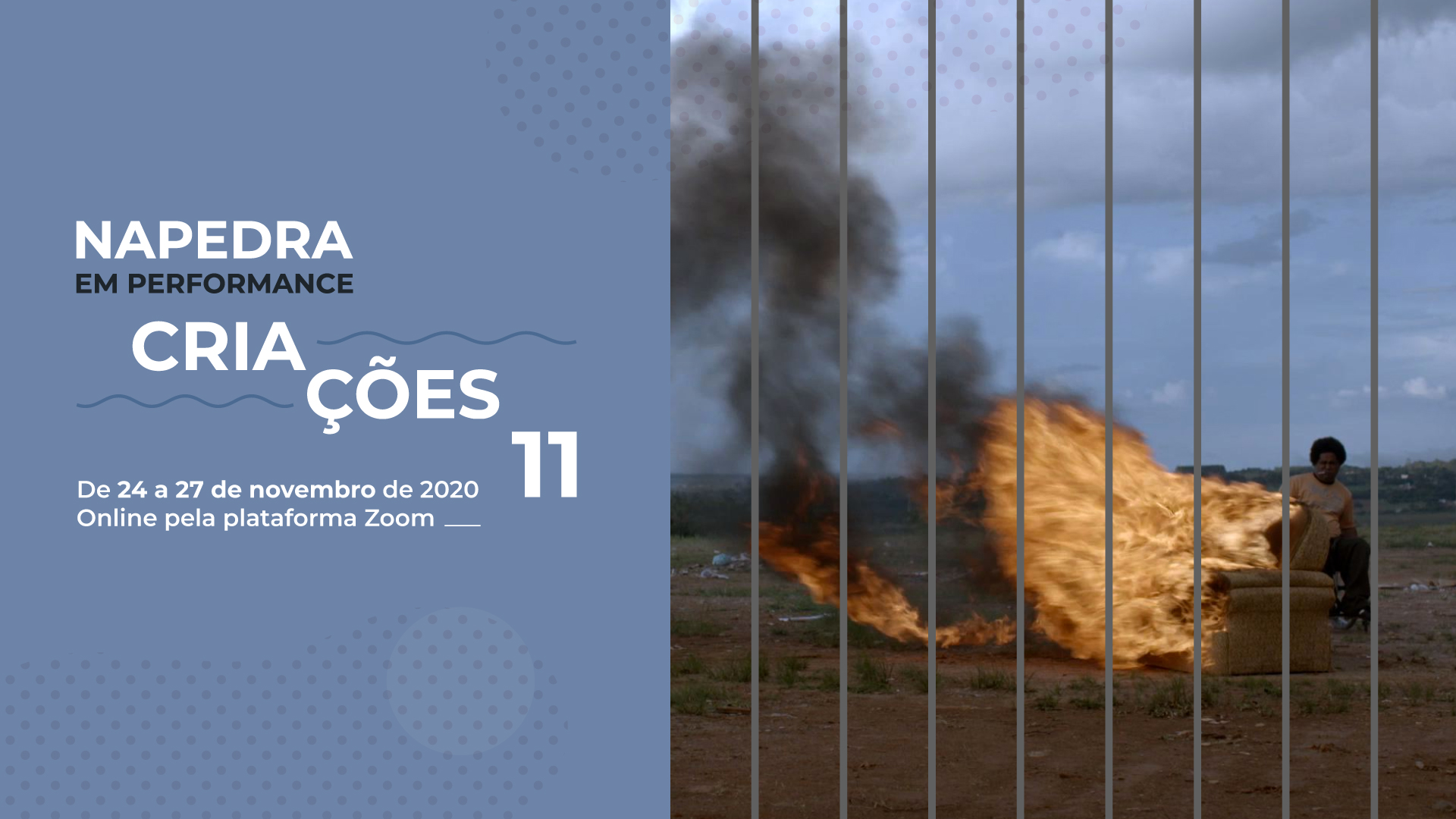 Napedra has been a pioneer in performance studies in Brazilian anthropology. It organized events that mark the field of performance anthropology, such as the International Anthropology and Performance Meeting - EIAP (2011), the 1st National Anthropology and Performance Meeting - ENAP (2010), and the Meetings with Richard Schechner (2013). He proposed the first research forums and working groups in performance studies of the Brazilian Association of Anthropology (ABANNE 2003; RBA 2004, 2006, 2012) and the National Association of Graduate Studies and Research in Social Sciences (ANPOCS 2005, 2006, 2007 ). He organized research forums and work groups at the First Latin American Anthropology Congress (ALA 2005) and Mercosur Anthropology Meetings (RAM 2005, 2009). In 2009, he held the Colloquium of Napedra: Sounds, Noises and Poetics of Performance. From 2008 to 2013, she developed the thematic project Anthropology of Performance: Drama, Aesthetics and Ritual (06 / 53006-2), a period in which Regina Pólo Müller's participation stands out, as a principal researcher. The project resulted in 22 books, 81 articles, 82 book chapters, and 102 international presentations.

The link to the ZOOM platform for participation in all events can be found here. 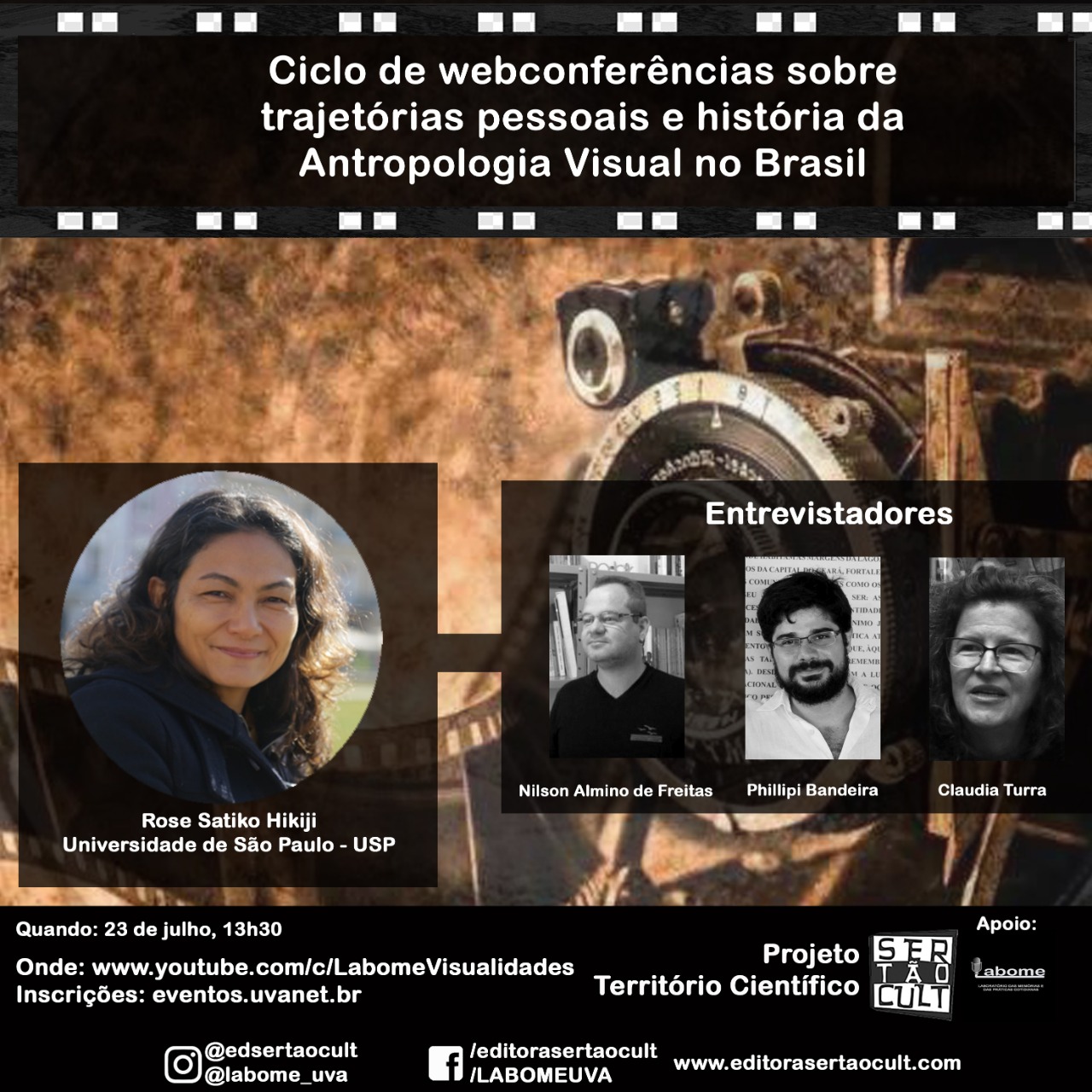 Professor Rose Satiko was interviewed in the cycle of web conferences on personal trajectories and history of visual anthropology in Brazil. 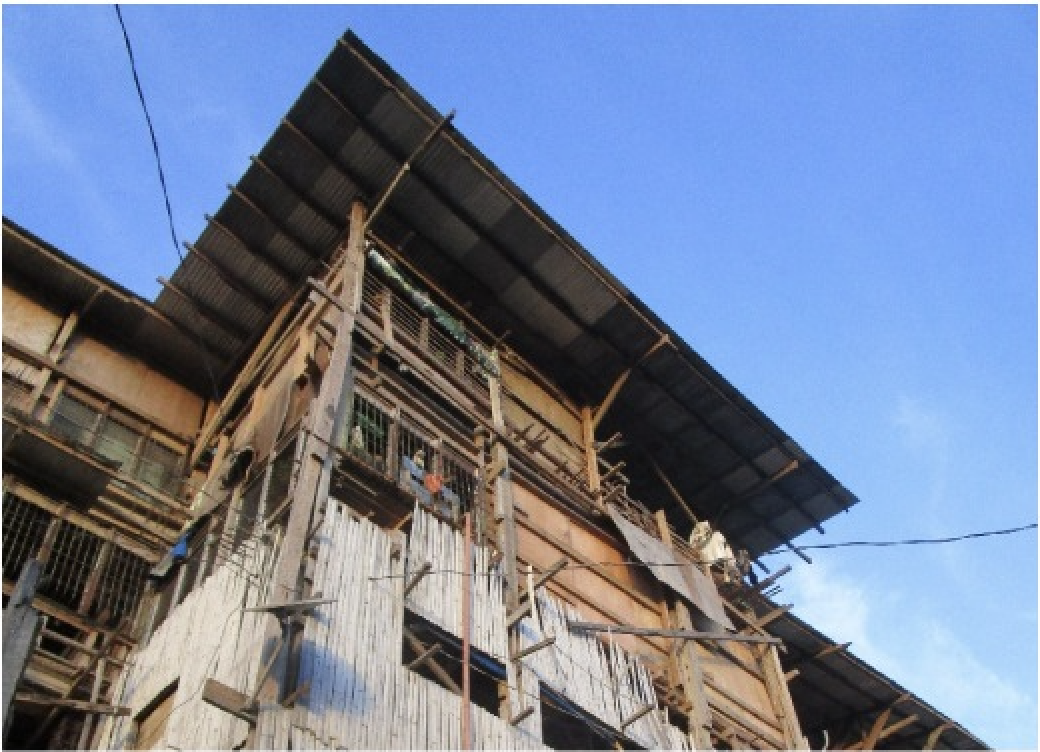 History, Mathematics and Nationalism in the kingdom of God - An Ethnographic Report on Dapitan, Philippines
LISA Auditorium - Rua do Anfiteatro, 181, Favo 10

This talk advances preliminary thoughts on the production of history in the precarious informal community of New Jerusalem, in the southern Philippine town of Dapitan. This community is the sacred capital of the Kingdom of God, a Messianic organization whose most important rituals are history classes based on elaborate arithmetic and on a combinations of Biblical and Phillippine national narratives.

As several other Phillipine groups, this organization sees national hero José Rizal (1861-1895) as God Himself, but interprets him in a particular way, as part of an arithmetic-based plot that portrays the Phillipines as the new promised land of the Israelites. Based on fieldwork conducted in January and February 2019, this lecture examines how, by putting history, arithmetic and nationalism at the center of its theology, the Kingdom of God attracts impoverished people from throughout the country; produces a temporality that is both repetitive and teleological; gives a sacred meaning to colonial and Post-colonial histories; and antecipates a future of autonomy, equality, health, and wealth for Filipinos.

A lecture (in English) by Prof. João Felipe Gonçalves
Department of Anthropology
University of Sao Paulo